A Very Happy Monday morning to you all. The biggest sporting spectacle of the year took place last night with the  New England Patriots taking home the Super Bowl trophy! The sad news the game did not live up to the hype and the sadder news is it is roughly seven months away before we get to see the pigskin fly again!

This past week I spent two days in Selma and Montgomery shooting an assignment documenting many of the historical sites and memorials related to slavery and the civil rights movement. To say the least, it was an extremely educational but highly emotional experience. It was a history lesson slap in the face that truly magnified the issues of those times. On day one of the journey we visited Selma, AL and toured the Selma Interpretive Center, the National Voting Rights Museum and Institute, Old Live Oak Cemetery and walked the historic Edmund Pettis Bridge where Bloody Sunday, the Civil rights march took place. As part of our experience, we had the opportunity to meet Annie Pearl Avery, a very prominent civil rights activist for voting rights and hear her speak of her trials and tribulations. She was the only individual that was arrested and jailed during the march, never making it across the bridge.

Once our Selma tour was complete, we headed to Montgomery for round two. We visited Dr. Kings Dexter Street church, the Civil Rights Memorial Center, the Alabama River front where slaves arrived and were then paraded in shackles through a tunnel to the center of downtown, the EJI Legacy Museum and finally the National Memorial for Peace and Justice. Along the way we had the honor meeting Georgette Norman, the former director of the Rosa Parks Museum and having her speak to the group and we were serenaded by The Voice season 7 musician, Toia Jones, in the hallway of a coffee shop. To quote Far Side artist Gary Larson, “Teacher may I be excused, my brain is full!”

To say this trip was emotional roller coaster would be a monumental understatement but as much as each location provided a history lesson in the struggles and tragedies experienced during this dark era in American history, there was nothing that prepared by for visiting the National Memorial for Peace and Justice. I had seen images of the memorial and saw the 60 Minutes segment with Oprah Winfrey but none of that prepared me for what I was about to personally witness and experience as I made my way into and through the memorial. 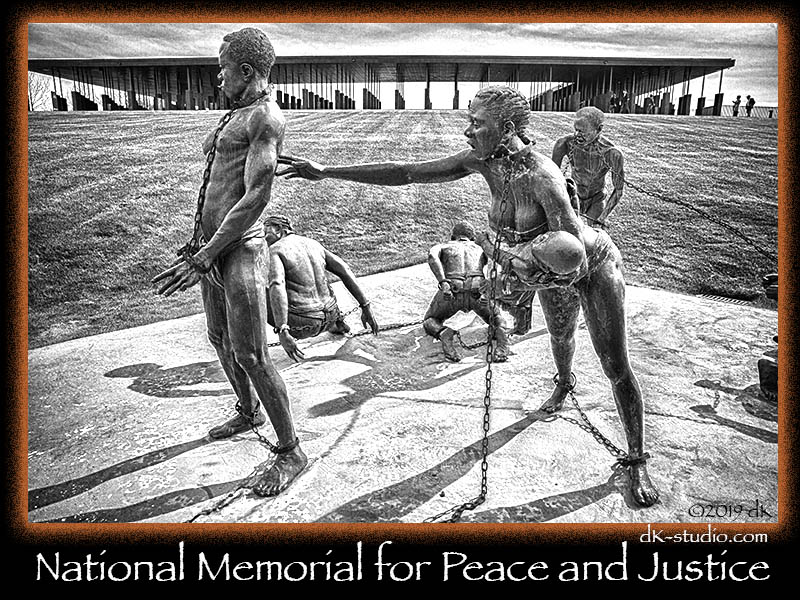 As we made our way into the grounds, we were immediately confronted by a sculpture depicting slavery by artist Kwame Akoto-Bamfo. From there we were taken on a journey that EJI describes as a journey from slavery, through lynching and racial terror. Funded by the Equal Justice Institute (EJI) the memorial is, “the nations first memorial dedicated to the legacy of enslaved black people, people terrorized by lynching, African Americans humiliated by racial segregation and people of color burdened by contemporary presumptions of guilt and police violence. The Memorial for Peace and Justice was conceived with the hope of creating a sober, meaningful site where people can gather and reflect on America’s history of racial inequality.” I say all of this to address the fact that this is a part of our history that is extremely difficult to consume, to accept and to come face to face with. History has found a way to put this on the back pages. 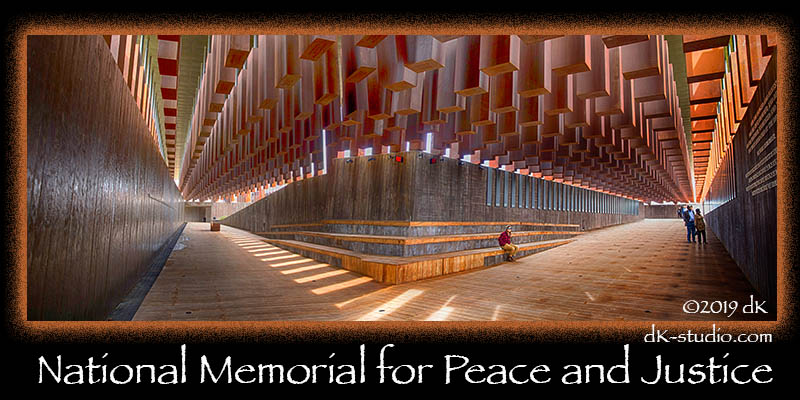 As you walk through the memorial the daunting vision of over 800 corten monuments raised above your head is visually symbolic and represents the over 4400 thousand documented lynching’s of African Americans that took place between 1877 and 1950. To say it is moving, again, would be a colossal understatement. The Memorial gives cause for you to pause, and it begs for your solitude, your respect and your emotional reflection. 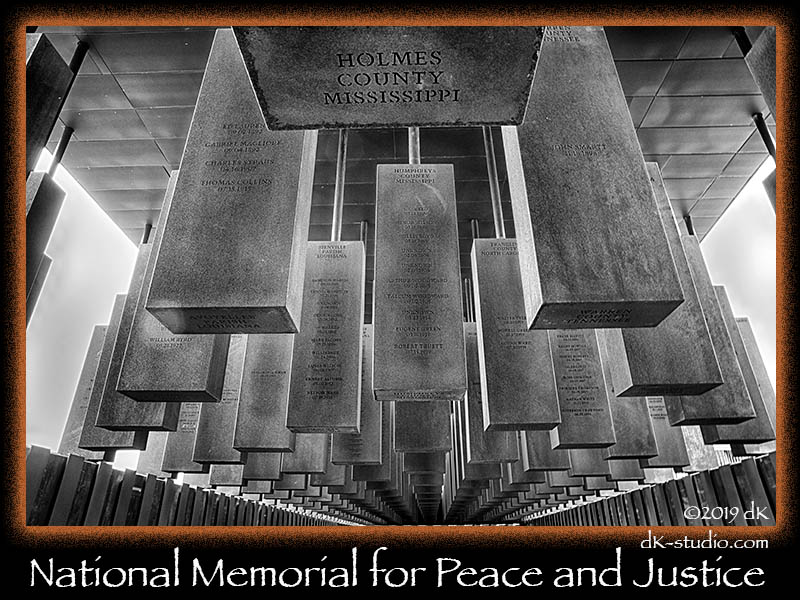 Each of the hanging monuments lists the state and counties along with the engraved names of each of the black victims that were lynched. As I made my way through the memorial I was over taken by the significant visual statement made by each of the monuments lifted above my head. No words of explanation were needed. It was captivating, it was powerful and it was extremely emotional. I have had the honor and privilege of photographing many things throughout my career but most all of it pales in comparison to the emotional effect this trip has had. If you have the opportunity, I would suggest visiting Montgomery this year is a must, the year of our states 200th anniversary celebration. As much it is a tragic reminder of a horrific time in our history, it is also a bridge to understand our past and help pave the way for our future.

Many thanks and much gratitude to my dear friend and client, Mr. Randall Russell and his team for including me in on this journey and letting me ride the bus! 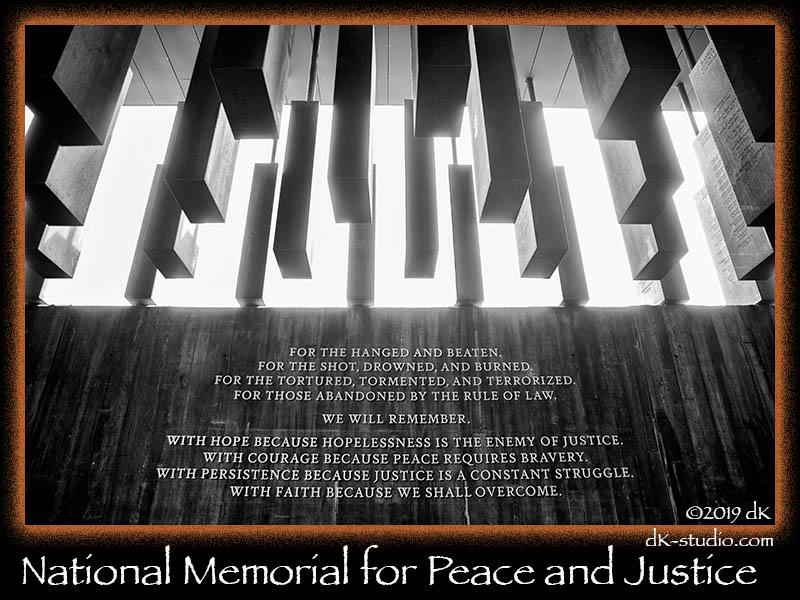 Receive emails when new blogs are posted, find out where Dennis will be, and keep up to date on the mailing list.