Happy Tuesday!! After a week of freezing cold temperatures and a surprise snow for some of us, it was a welcome relief to see the sun come out and to experience a few warmer days.

Last week’s snow was a true surprise to most in North Alabama even though it had been somewhat suggested by the weather stations. As predicted, on Tuesday, parts of Huntsville saw little to no snow. But on Wednesday evening, as I was driving home after dinner with a friend, a blanket of snow just magically appeared out of nowhere, with large snowflakes floating down, as I got on to 1-565 just north of the city. Residents woke up to parts of city getting 1 ½ inches to almost 4 inches while others saw nothing but freezing rain. There seemed to be a demarcation line west of the Parkway and to the north.

Growing up in Florida, I get almost “child-like” any time it snows and instantly have the urge to get out and capture the rare beauty of the white blanket and this time was no exception. I packed my car with water and a provision of Tom’s peanut butter ritz crackers and for three consecutive days headed out into the frozen tundra of North Alabama and Southern Tennessee, looking for the perfect snow setting. For most of those day journeys it was overcast and gray but on a few occasions the sun did peak out and offer a few glorious opportunities.

My first stop on the snow tour was Ardmore, TN. where the snow had laid down a beautiful white blanket surrounding an old barn and horse trailer.

Down the road and around a bend I found a second beautiful winter scene with a wintery creek and its magnificent reflection of iced laden trees.

Thinking that there was more to explore I crossed the Tennessee line and headed north to Pulaski, TN where I came across an old abandon homestead blanketed in snow and icicles. The thought of who once live there and what their activities would have been during the storm event crossed my mind. 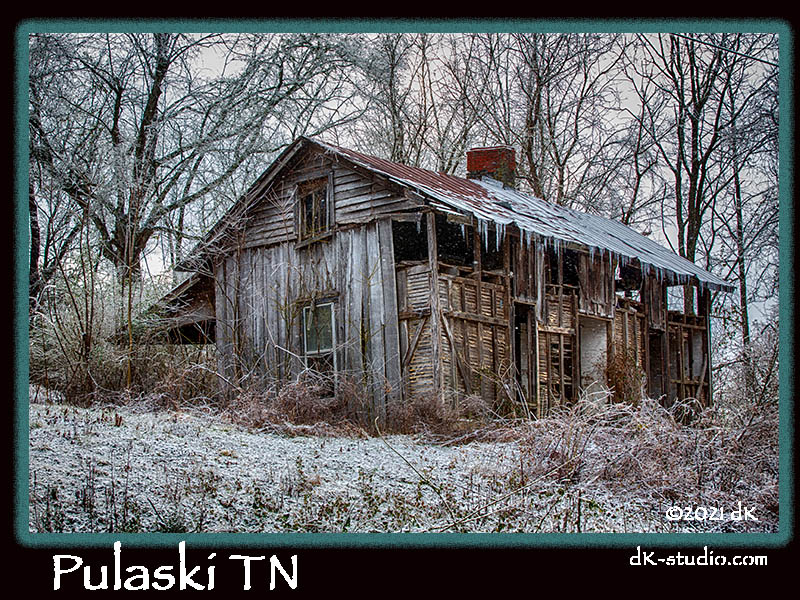 From there I decided to follow the slush and ice and headed down a few country roads. As the day was nearing the witching hour where roads turn into slush and black ice I was came across a famers pasture just as the clouds opened up and the sun glistened  for a few minutes backlighting a field of  ice laded trees. The view was spectacular !! 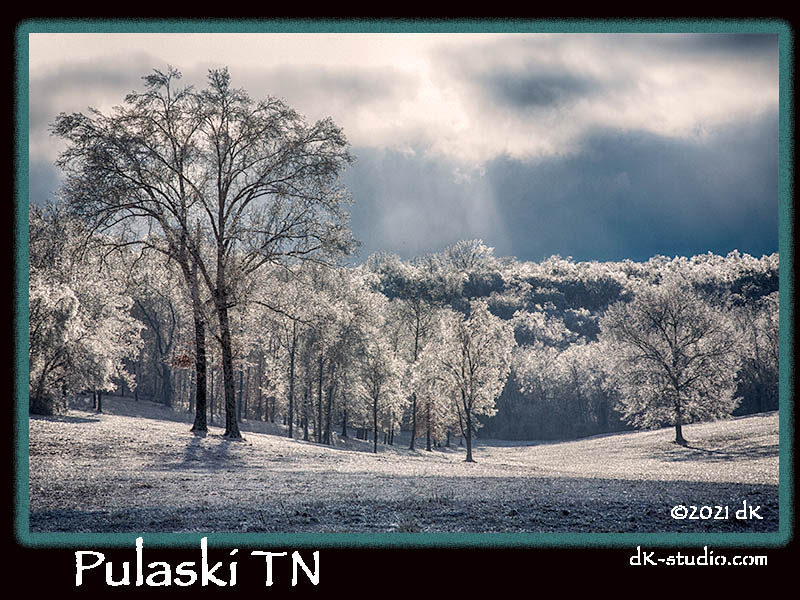 On my second day of my snow mis-adventures I decided to head a little further north thinking that southern and middle Tennessee had gotten a fair amount of snow. Heading up I-65 I decided to get off at the Lynnville – Cornersville exit and see what the two small towns had to offer, first heading east to Cornersville. Not seeing much in the way of picturesque snow opportunities I turned my vehicle around and headed west not knowing what I was to encounter never having been to Lynnville. What I did come across was an abundance of pastures and barns as well as a very quaint and picturesque downtown. The town is known for its railroad museum, the Lynnville Fried Pie company, Big Johnny’s Hamburger and Big Machine Distillery where their world famous “shine” – All Mighty 140 is made. The population of Lynnville according to the 2010 Census was around 287.

When traveling in this kind of weather my biggest fear is hitting a patch of ice and ending up in a ditch or worse. As I topped a road coming out of the “city” I stopped on a slight incline to let a farmer and tractor pass and sure enough my vehicle did the unthinkable and started sliding backwards – slowly into a ditch. I was fortunate that the farmer returned to help. I have a tow road which I have had since my “beach” days in the Outer Banks, that once hooked to the tractor,  allowed him to pull me to safety and usher this city slicker on his way with the fond farewell of, “ That’s what we do here, we help our neighbors!” With my anxiety level a little higher due to my icy experience I decided to head south but not before I grabbed one last shot of  a beautiful snow-covered pasture with a red barn on SR 129!!! 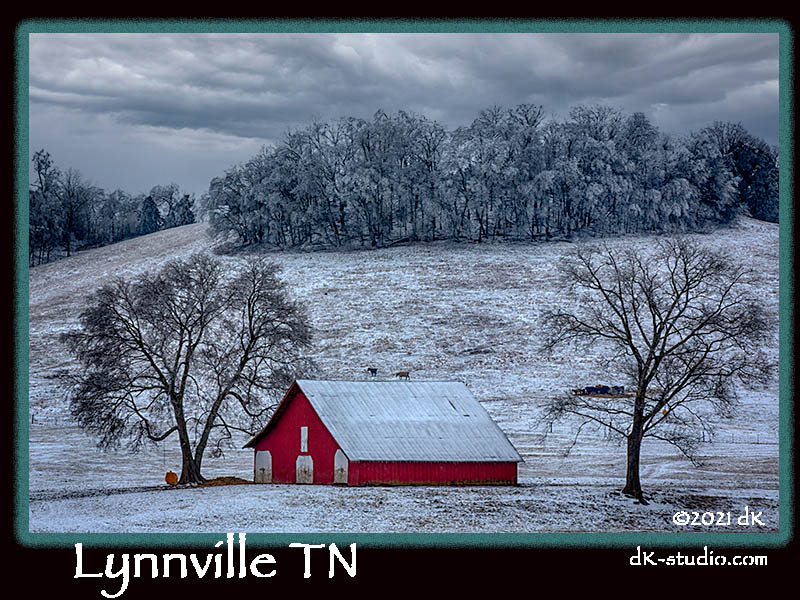 Apparently, according to Facebook posts I read, I was a day early on my visit to Lynnville. It seems that on the evening  after my visit they got snow that ended up being over four inches. Such is life if the quest of a snow chaser in the south.