We Are The Champions

I would have to say that I am getting just a little bit worried about all the rain we have had and what appears to be more on the way. I have been watching closely to see if any animals are starting to pair up. Just for good measure I called Hope Depot to see how the supply of wood was holding up. Hopefully we will see the sun shine bright in a couple of days.

This is the time of year that avid sports fan dream about. College football has just finished another incredible year and the NFL is in the finals of the season ending playoffs with the Atlanta Falcons in the hunt. One thing for sure, there have been many surprising twists and turns in both and as they say, “On Any Given Day!”

I am not sure about you but like a lot of people I have my football “traditions and superstitions” when it comes to game day. I feel extremely anxious if I do not follow and adhere to my sports superstitions. My most prevalent tradition started after the Tide won the first championship in 2009, I bought the SEC 2009 Conference Championship hat and followed up with purchasing the 2009 National Championship Hat. For every Alabama game since 2009 I have worn the National Championship game hat with the exception of two games, both of which were on days Alabama lost; the LSU game in 2011 and the Texas A&M in 2012. Now call it coincidence or just dumb luck but I have become a believer. One day soon I know I am going to have to clean it so I just hope it does not wash away the “good luck”.

As has become a tradition with the Tide winning so has my tradition to create a photographic tribute to them and as such, the tradition continues. Thanks to my dear friend, Kristi Green for being the subject of this years’ tribute to the 2012 National Champions, Roll Tide Roll!!!!!! 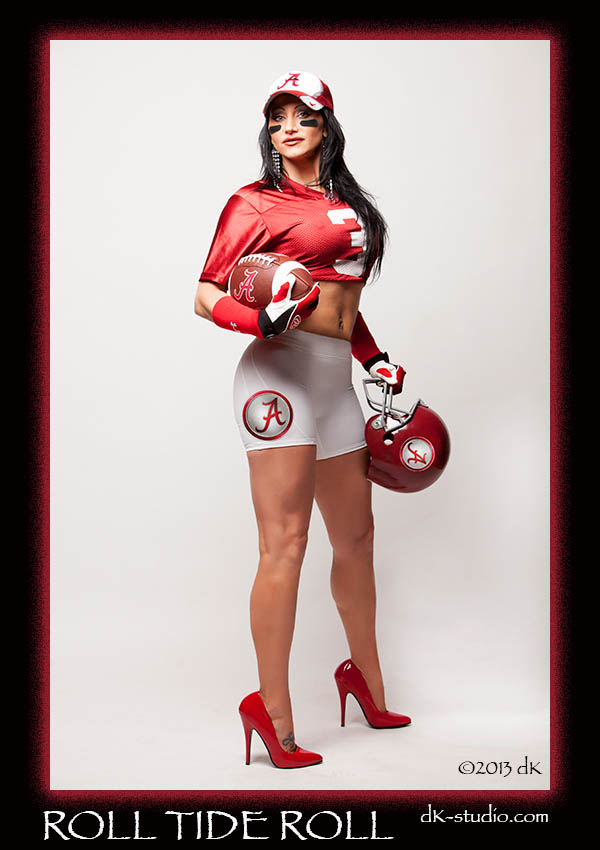 Please do keep us in mind for any upcoming photographic assignments. As well, give thought to our vast collection of stock imagery which can be found at either of our two web locations –  http://www.dk-studio.com or http://store.hwy12photoarts.com. for any of your art, corporate or editorial needs.