What a Beautiful weekend it was last week in Kansas City and then to come home to a stunning week in Huntsville.  Can it get any better than that?

I always look forward to spending time in Kansas City. I find it to be a city that has allot to offer and, as much as it is a big city, it does not have a big city feel or the traffic. The city is known for the Kansas City Royals and the Kansas City Chiefs. When you think of Barbeque you think of KC and it being host to the World Series of Barbeque, the American Royal. It is home to the Negro League Baseball Museum and American Jazz Museum – where it can be said “that jazz was born in New Orleans, but it grew up in Kansas City”. Even though it is known for BEEF, there are some pretty fabulous sushi bars in town. But when thinking of KC, most would not think of the ARTS being that it is a mid-western cow town.

Traveling to Kansas City I have found the city to be in a rebirth of support of the Arts.  Artist Lofts, Galleries and Museums can be found all over the city and the surrounding communities. It is known as the City of Fountains.

While driving around the city we came across the Nelson-Atkins Museum of the Arts and the eye-catching display of larger than life “badminton birdies”. It was just too incredible to pass up. All I could wonder was …… where were the racquets? Just to enlighten those novices such as myself, in the game of badminton the birdie is actually called a “shuttlecock” and is a derivative from the traditional English game of battledore and shuttlecock. Of course … you knew that!?!? 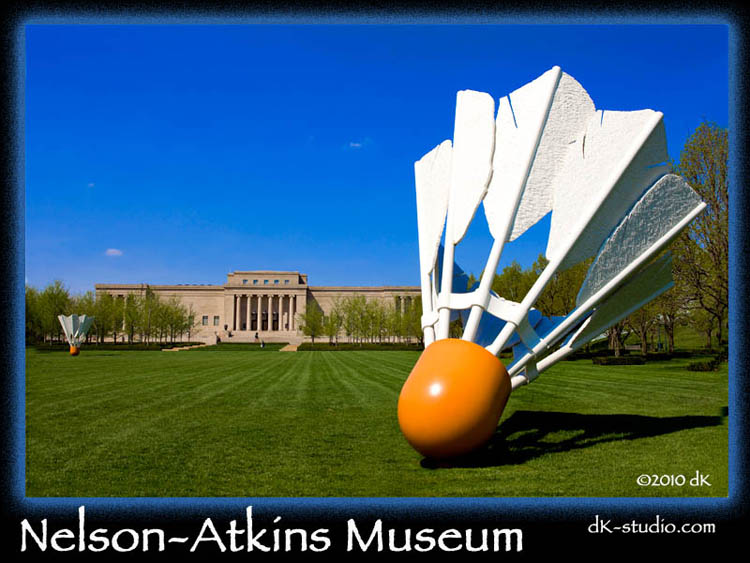 As you might know, if you have a photographic assignment I can assist you with I am no further than a phone call (or email) away . Until then