What is it with the weather? It was colder in Alabama last week than in most of the states in the northeast. Since I am just returning home from a holiday trip, I am glad to know that I do not have to deal with the ice and snow like I did on my return in 2011.

If you are any type of football fan the last couple of weeks has been extremely exciting in college football, as well as, the NFL. But it all pales in comparison to the game that is to take place this evening in the Superdome in New Orleans. The BCS Championship Bowl game pits #1 LSU vs. #2 Alabama whom are undisputable as the best two teams in the nation, both hailing from the strongest conference in college football, the SEC. Given the outcome during the regular season when these two teams met, there is allot more on the line this time around for the Alabama Crimson Tide.

I have no doubt, no matter what the outcome of this game, that the debate will continue as to whether these two teams, having already played once, should have played each other again. It will also fuel the debate over whether college football should finally institute a playoff series tournament like all of the other major college sports. Rest assured though, it will once again point to the dominance of the SEC and the teams that play in this conference.

When Alabama was vying for the National Championship in 2010 I created a photographic tribute, which appeared in my blog, to the team and to the Heisman Trophy winner, Mark Ingram. Since there is no doubt (in my mind) that the photograph must have been a “good luck charm” in 2010, I felt inclined to create a new tribute in hopes that it would assist the team in it’s goal of seeking and obtaining a new championship.

I greatly appreciate the assistance of the stellar Makeup artist, Ms. Kate Carroll and the very beautiful and talented model, Ms. Ashley Fletcher. 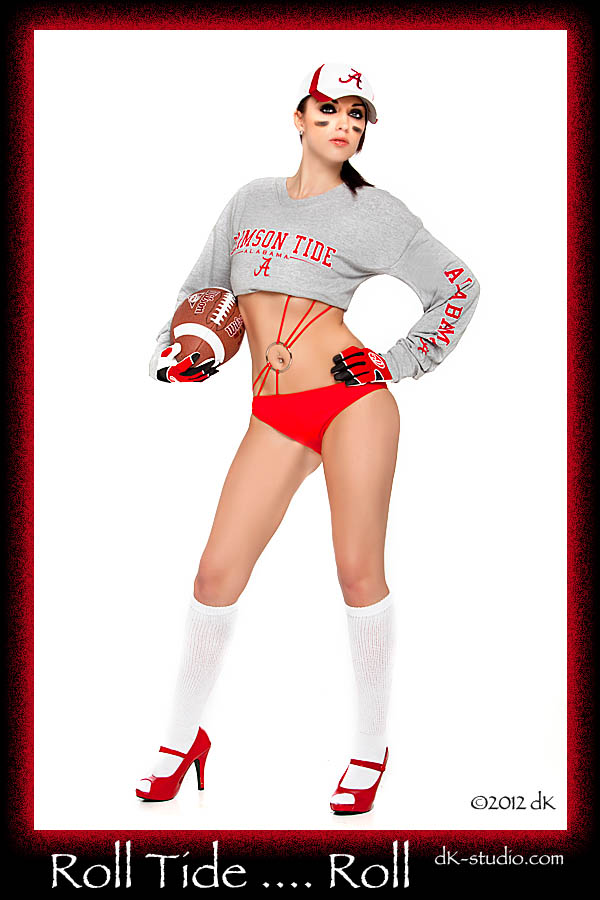 We look forward to 2012 and assisting you with all of your photographic requirements so, please do keep us in mind. Examples of our stock imagery can be found at one of two locations –  http://www.dk-studio.com or http://store.hwy12photoarts.com.