Fall has definitely arrived and what better way to announce its arrival than to celebrate the spirited and goulish annual holiday Halloween. It is the one day where dressing up as pirates, ghosts, devils, drag queens and Madonna is acceptable and all for the bounty of chocolate and kernel korn.

Cheryl and I decided to take the ferry over to the island of Ocracoke and take advantage of the cool weather. The village was full of little pirates and costumed characters trick or treating. We could think of no better place to be on Halloween than the one place where the most infamous of all pirates, Blackbeard, sought refuge and was eventually captured and beheaded.

As history has recorded, Blackbeard (Edward Teach) roamed the Caribbean to the Virginia Capes robbing ships in 1717. In the fall of 1718 Teach returned from his piracy at sea to his favorite hideaway, the island of Ocracoke. He hosted a huge, wild pirate get-together with dancing, drinking, and bonfires. Other famous pirates sailed in for the days-long event. In November 1718, Lt. Robert Maynard of the British Navy, commanding a sloop sent by the Governor of Virginia, captured and killed Blackbeard in a bloody duel near Ocracoke. As a warning to other pirates, Blackbeard was beheaded, his body tossed to sea and his head suspended from the bow of Maynard’s sloop..

As we past through the heart of the village and Silver Lake Harbor came into view, a ship gave us cause to pause and reflect back on the history of the Island and the pirate Blackbeard. Moored out in the middle of the harbor, was a sleek but aging black sailboat sporting a pirate flag. For that brief moment we found ourselves wondering if the ghost of Blackbeard was back sailing the high seas and had returned to Ocracoke to reclaim his bounty. Happy Halloween!! 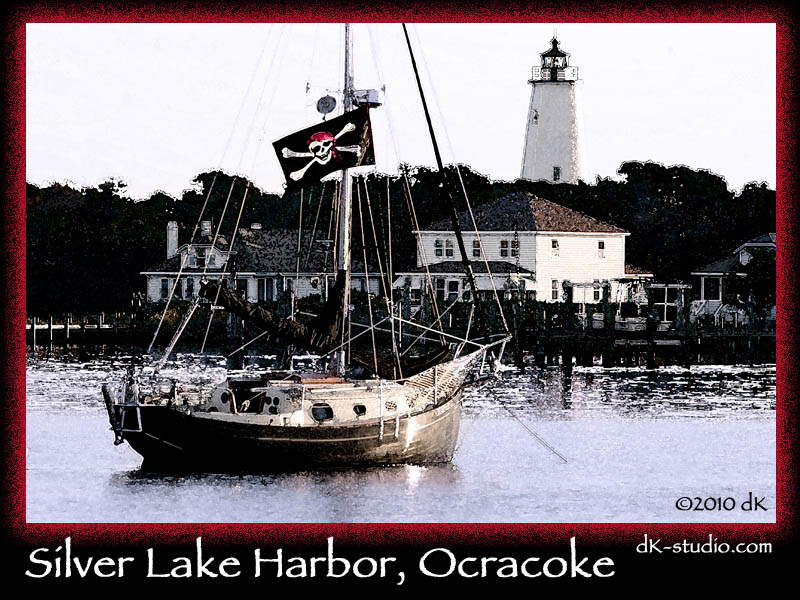 All photos appearing in the blog are available for private, corporate or stock purchase. If you have a corporate shoot upcoming , I am no further away then a phone call or email.