A very Happy Monday morning to you. For the most part is was a fabulous weekend in the neighborhood.

Last week I had the opportunity to shoot part two of a corporate shoot that had me starting in Decatur, Al and then flying a few days later to Salt Lake City, Utah. I had never been to Utah and looked forward to the potential o a few free hours to go road tripp’n and check out the surrounding Rocky Mountains. Like most industrial corporate shoots we were on a tight schedule, one day flying, one day shooting and then a return on the following day. Not much time for sightseeing. With that in mind Ben Starks, the videographer that I was traveling with and I decided to make the most of the free time we had.

After checking into the hotel, Ben and I decided to head downtown to check out a few of the city sites before the sun set. Salt Lake is the capital of Utah and where Brigham Young first settled in 1847. It is best known for being the headquarters of The Church of Latter-day Saints. As we drove around, one prominent structure stood out and that was the Capital building and it’s dome.  It is a very awe-inspiring building and a statue of Brigham Young stood watch boldly over the grounds. 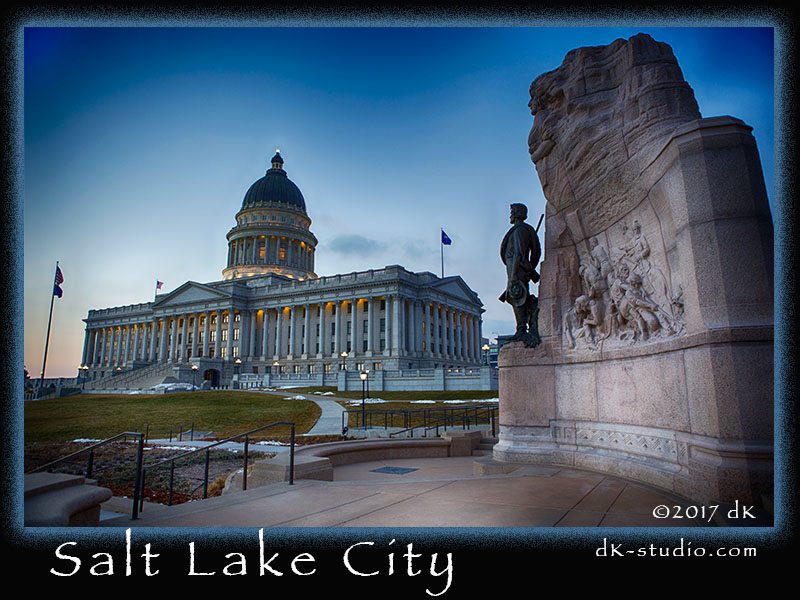 As we continued our journey we ended up on a residential hilltop just north of the city that hosted a large amount of post-moderns designed homes and the best view of the city. I would venture to say with that view, we were definitely not on the “wrong side” of the tracks. We were actually able to find a vacant lot with a no-trespassing sign and took full advantage of it – along with a few other individuals that apparently could not read either. It was an extremely impressive vista for viewing the city. The biggest issue was they were experiencing a temperature “inversion” which totally hid the mountain ranges. 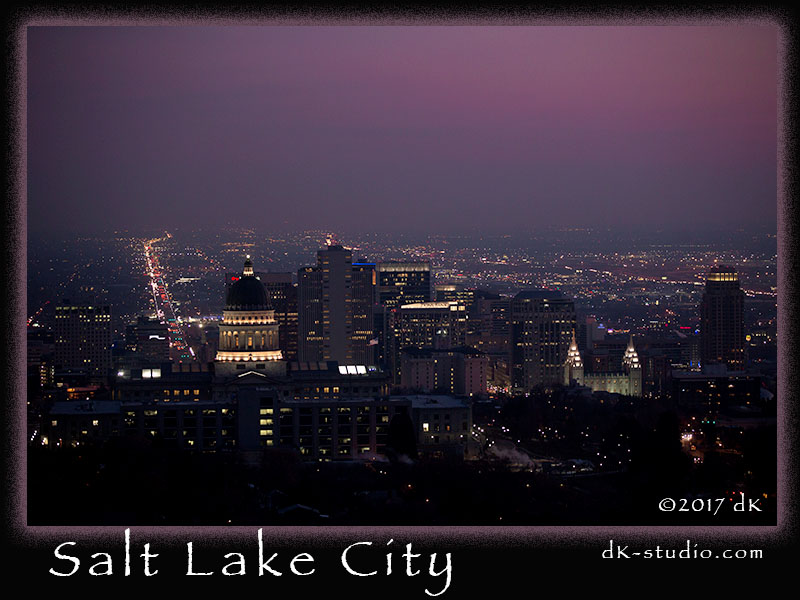 I had been extremely excited about the opportunity to travel to Salt Lake for one very good reason other than the shoot.  I had know for some time that one of my childhood schoolmates, Bryan McElroy, who was a like my brother in junior high and was living in Salt Lake City. Bryan and I had not seen each other in over 45 years and I knew this was not an opportunity to be wasted by not finding time to re-acquaint our brother-hood. Their were five of us that were attached at the hip during the 8th-10th grade and Bryan was one of closest running buddies, spending much time at each others house, surfing together on the east coast of Florida and working numerous jobs together. Our last sighting was a monumental road trip driving back to Tampa from Fort Huachuca, AZ. Bryans father was in the army and had moved west when we were in the tenth grade. We spoke regularly and made a deal for me to fly out and drive back with him to Tampa during that summer for one last visit. We lost touch after that until a few years back when he called my parents home trying to find me and keep in touch until I realized that this trip was going to bring it all back. So how do you catch up on forty-five years? You basically speed read through all that has happened and then end the evening on talking about all the escapades of your child hood antics. It was great seeing my friend again ands many thanks to his wife Jill for enduring all of those childhood conversations about our many boyhood antics.

With our shoot completed and the reunion accomplished it was time to pack up and head home. Flying in to the city I had noticed how majestic the mountaintops looked as they peaked through the clouds. Unfortunately I was not sitting in a window seat so I was unable to take advantage of the view. On our flight out I did have a window seat but it was looking east and we were departing just as the sun was rising. The sunrise view was spectacular but made it difficult to capture the true essence of the Rocky Mountains from my seat. I did happen to capture a few vistas that were majestic. It just made me want to come back and visit my friend, knowing that on the return flight I will find the proper seats flying in and out. Enjoy!!!!! 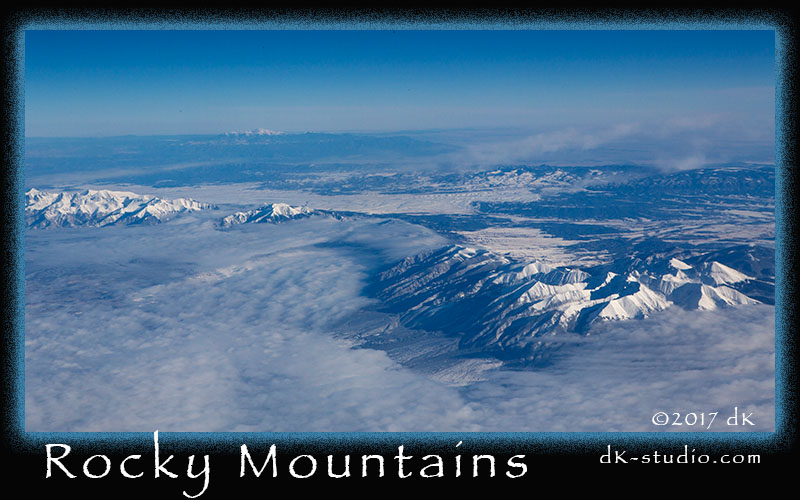