Greetings and welcome to the first Monday of May, which as the saying goes, brings May showers. It appears that Mother Nature was fully aware that May was approaching and, as a secondary indictor, that it was the Panoply Arts Festival weekend in Huntsville, AL. There are two things that you can bet on during Panoply weekend that is now hosted by the newly named arts organization “Arts Huntsville!” One is that it will rain and the other is that hometown favorite Blues artist Microwave Dave and the Nukes will be there on the first day to open the festival and the last day to close the festival. It would be hard to remember the festival without either but I do believe it has happened at least once for both. The good news is they both continue to prevail!

Friday started out looking exceptionally good with elementary students from all over the Tennessee Valley getting a day off from school for a field trip to take in the sights and sounds and get the traditional welcome by Microwave Dave and the Nukes. Dave and his band has been an iconic fixture at Panoply and you can see that he relishes the opportunity of introducing the blues to the young fans. But as the day progressed the ominous dark clouds approached with rain and lightning came and the gates for day one never opened. The best I could to do, photographically, was to capture the festival through a rain drenched pain of glass. 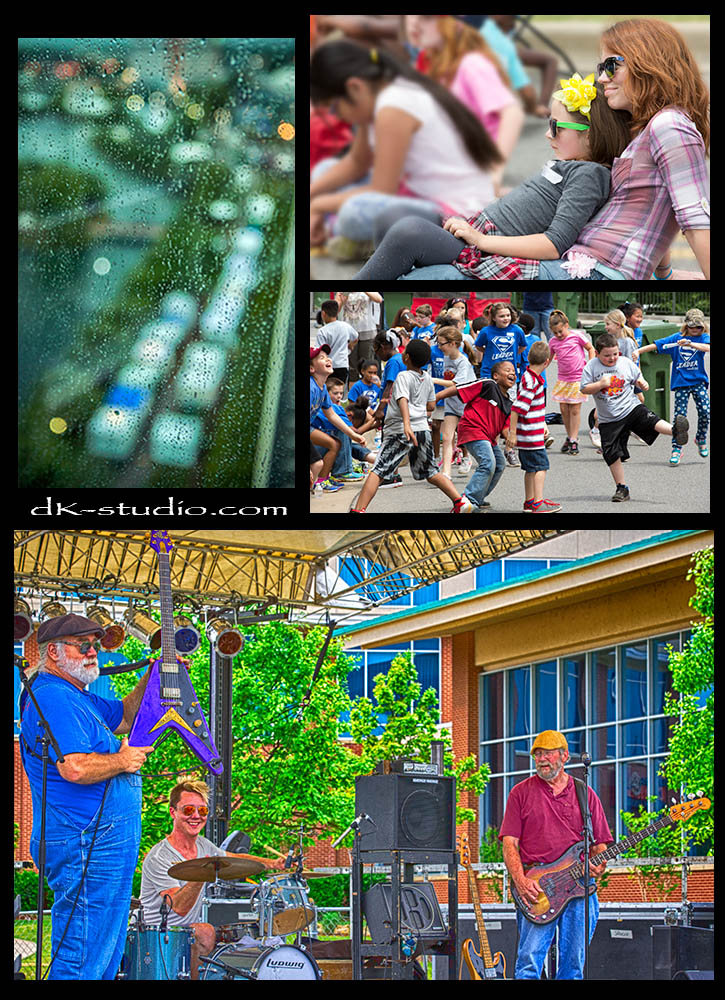 Day two opened with the prediction of rain but as the day progressed and with the crowds coming though the gate it appeared that the festival was back on track. It was if Mother Nature said “enough” and decided to alter the threat of rain and have it by-pass the festival. As the afternoon approached and with the weatherman’s prediction for a rain free afternoon and evening held, record crowds began to come out for what was to be a stellar day for Panoply. That was until the Tornado warning sirens went off around 4:00 PM and the crowds were ushered out of the park. The good news was the park was cleared in a very safe and timely manner but the band news the warning was not meant for this area of Madison County. When the warning was cleared and the gates reopened at 6:00 PM, the crowds never returned. It was very unfortunate it turned out to be a beautiful evening with an exceptional line up of music appearing on the three stages. The city and the park came back alive with the wonderful sights and sounds that Panoply is known for. For those that did make it out, it was like having their own very personal concerts in the park surrounded by art and catered with a variety of foods to select from.

With the ever-present prediction of rain for most of the weekend, it was unfortunate for Arts Huntsville because, overall, it was a wonderful weekend of Music, Arts and Community. Panoply, in spite of the rains, continues to be a regional showcase of talent with this year’s musicians and artists once again accentuating the extent and depth of talent residing in and around this area.

Unfortunately, the weatherman’s prediction of rain caught up with the festival and even though it had only a slight moment of rain on the final day, the weekend prediction became a mind set for those wanting to attend and most likely altered their plans for attending on Sunday. And true to the Festival, Microwave Dave and the Nukes played as if there was a crowd of thousands as the festival came to is close. In spite of the prediction of rain, the event and the weekend turned out to be an exceptional photographic opportunity for me. Many thanks to the staff at the PNC, the VBCC and the Embassy Suites for their gracious hospitality and assistance for the wonderful vantage points to capture some exceptional Panoply weekend views.

Keep us in mind for any of your upcoming photographic assignments. If you were unaware, all of the art showcased in my blogs, as well as, on my web sites is available for publication or for purchase as corporate and residential collectible art.