I hope that you all had a fabulous weekend and are now hitting the office with Monday Morning Mania. I am on the road traveling back from Baltimore where I was instructing at a photographic workshop.

Sometimes it just pays to be in the right place at the right time. Last week my girlfriend and I decided to head out to the beach and do a little location scouting in spite of the bad weather that was looming. As we got to the beach it started to rain but ever so slightly so we chose to continue with our mission. As we toured the area I looked to the ocean and saw what appeared to be the start of a rainbow. While we stood and watched, the rainbow continued to grow little by little and increased ever so slightly in color intensity. As we stood there, I began to think it would never reach it’s full potential but it continued to grow both in size and in color. It was as if the colors began pulsating in rich neon colors and each band of the rainbow was becoming more defined. But again as we stood and watch as the colors became more brilliant we both thought that we would never see if continue to become a full arch. It was if it was teasing us with some growth and tempting us with its brilliant colors. I decided to go back to vehicle and get another lens just in case. As I turned back from the car to see the extent of the rainbow, it had miraculously manifested itself into the most majestic image of brilliant colors and shape I have ever witnessed. It was breathtaking and I can honestly say in all the years I have been a photographer I have not witnessed the beauty of a rainbow or experienced the intensity of colors this rainbow possessed. To top it off it was a double rainbow.

We stood in awe of the beauty of what appeared before us and it was difficult to decide whether to continue to photograph it or just stand and take in the moment. It was a hard decision to make so I attempted to do both. As the rainbow diminished we both stood in disbelief of what we had just seen.

Over the next couple of days the talk of the island was whether or not you had seen the rainbow that evening. I even think the island shifted a little to the east with everyone attempting to get a view of the double rainbow. Everyone was talking about just how amazing if was and how incredibly neon the colors were. I could not help but join in the conversation knowing that I had not only been witness to one of the most incredible acts of nature I had ever seen but I actually had proof.

If there ever was a pot of gold at the end of the rainbow this was the one where it would have been found. The only way to describe it is, “It was Picture Perfect!” 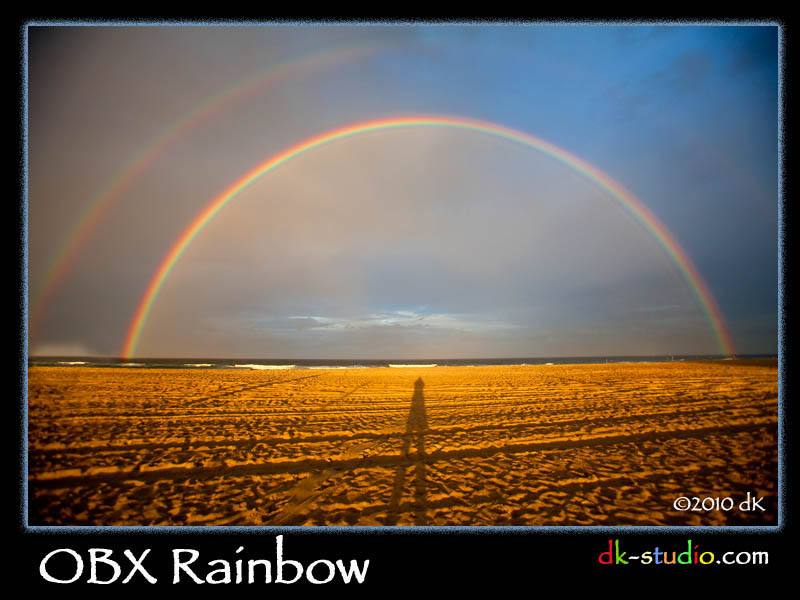 All my best for the week ahead and if you are in need of any photographic services do not hesitate to call.