A very happy Monday morning to you. For most of last week we were treated to fall-like temperatures and what a wonderful time to be outdoors.

It is hard to imagine that my blog would feature rocket ships and musicians two weeks in a row but I guess when you have a good thing going you stick with it. Last Friday the Land Trust of North Alabama hosted it’s last concert of the 2015 concert series at Historic Three Caves. To say they may have saved the best for last may be a slight exaggeration but it could be said that it was the “best of a new generation”! Friday evening we had a “Go for Launch” at the Caves with the incredible and extremely talented band, Moon Taxi.

I am on the Land Trust concert committee this year and my task for this concert was to escort the band during their visit to the Space City. The suggestion was presented that what better fit for them then to take a tour of the US Space and Rocket Center. And what a fun fit it was for the guys, going where no Moon Taxi has gone before.  So for a couple of hours it was all rock and roll and moon ships. At the end of their visit they were presented with Space Camp flight suits that provided us the opportunity to capture a dynamic image with the Space Shuttle display as a backdrop. I would like to offer my sincere thanks and gratitude to Dr. Deborah Barnhart and her staff for making it such a memorable visit for the members of Moon Taxi. I am not sure if they felt more like rock stars or astronauts upon their departure.

Once their “mission” was complete, it was time to rocket over to Three Caves and sound check.  It was somewhat surreal listening and watching them wearing the newly acquired space suits against the backdrop of Three Caves. The band is coming off stellar performances at the mega festivals Lollapalooza and Bonnaroo this year so it was a major coup to have them playing the Caves.  Even more gratifying to hear them say how excited they were to be playing at Three Caves and such a unique venue. Three Caves continues to be one of the best keep music venue secrets in all of Alabama. Maybe after Friday night it will not be such a secret. 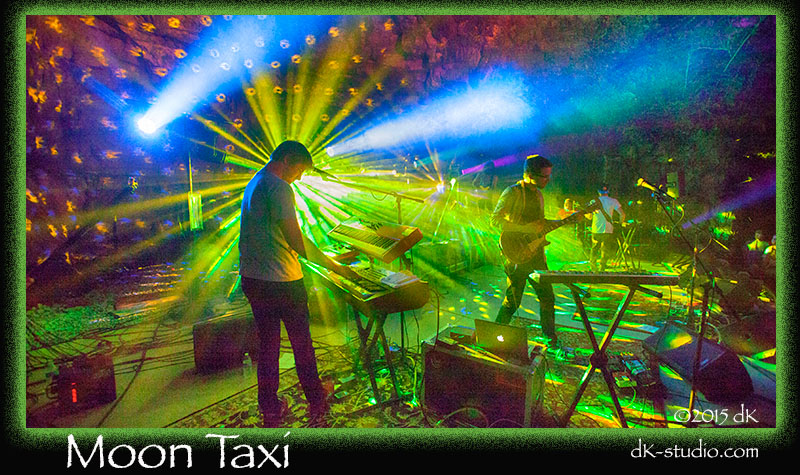 As we settled in for the evening and prepared for them to take the stage to a sell out crowd, I could not help but think how very fitting that a group of young musicians named Moon Taxi would be carrying on a music legacy in a city known for it’s historic space legacy. And what a show it was with their “Close Encounters” lighting that gave the appearance of an alien invasion. All in all in was a magical evening under the stars! “Huntsville, we have a Go for Launch – God Speed Moon Taxi”!

A little shout out to my partners in crime for all of the musical adventures this year – Mr. David Milly and Ms. DeAnn Fowler: “It’s only rock and roll but I like it!” 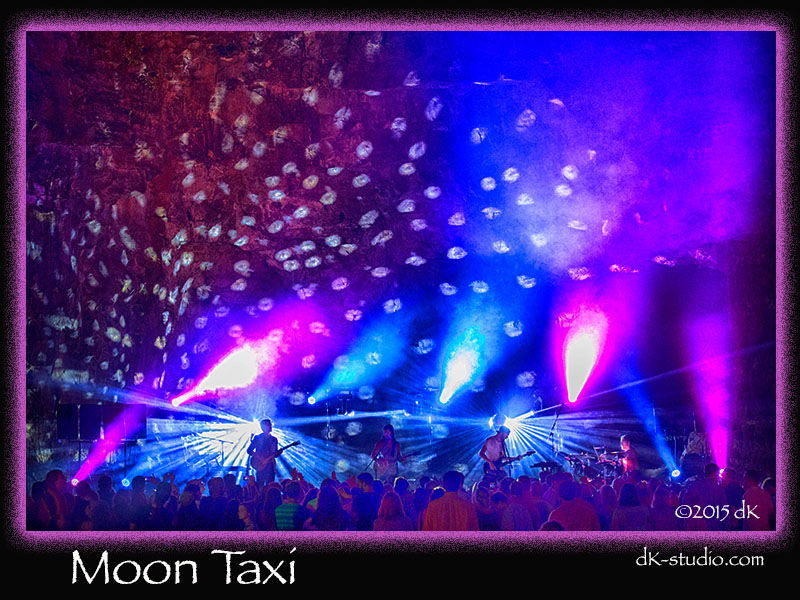