Just Another Day at the Office

With all the rain and as hot as it is, I guess you could say that summer has officially announced its presence. I hope you found a cool place to enjoy the weekend.

Anyone that fishes knows that North Carolina is one of the best spots on the east coast for big game fish. With the gulf stream so close to the Outer Banks, charter boat fishing is big business for those looking to grab a trophy fish and bragging rights on Monday around the coffee pot. For those spectators waiting at the docks to see the “catch of the day” there is nothing more impressive than to watch the boats coming back to the marina’s with fish flags flying. Each flag represents a different catch (Blue Marlin, Tuna, Sailfish) and it is not unusual to see one or two of these flags flying high on a boat. More flags mean a more productive day and more bragging rights for crew and fisherman

While out touring the island on Sunday we stopped by Oregon Inlet Fishing Center, one of the largest marinas on the Eastern seaboard, where we came across one boat that had more that a good day. The charter, Qualifier captained by Aaron Wright, was flying 8 flags for the days efforts. And the eight flags were all Sailfish, a huge accomplishment for one day of fishing. The best news of it all was they were caught, photographed and then released to enjoy another day of being a fish.

I would think Captain Wright, when asked about the day, would say,“Just another day at the office!” 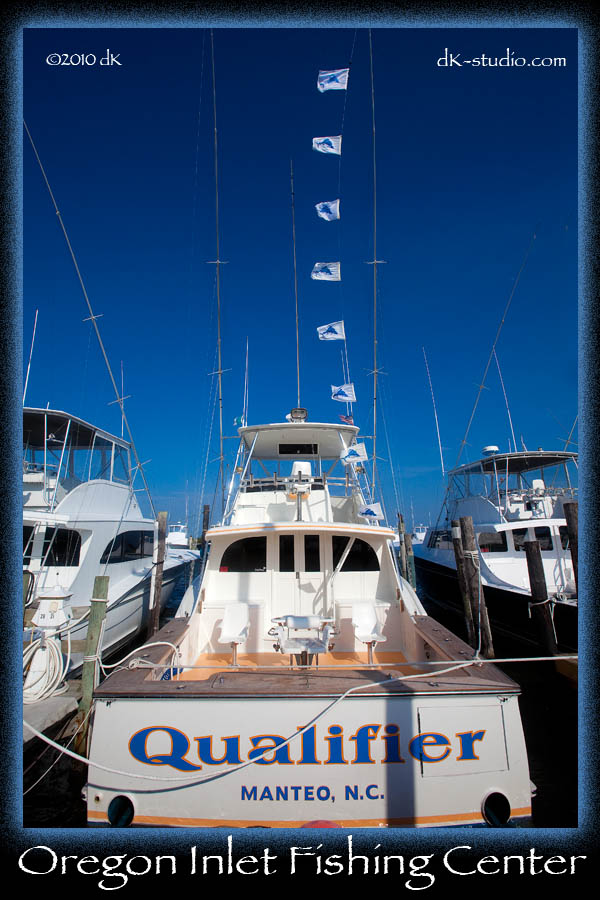 Looking for a stock shot or do you have an assignment coming up, do not hesitate to contact me. I am no more than a phone call or email away!