For those of you that actually read my blog every Monday, my apologies for missing last week. My mother had fallen ill and I was on a plane to Phoenix with the hope of arriving in time to see her one last time. She had been in an extended battle with cancer and it had become very apparent that she was losing the battle.

I always struggle when giving consideration to writing something emotional or personal in my blog. It has always been my desire to post a unique or inspirational photograph and message to start the week off. Given last weeks circumstances, I knew it would be difficult not to write about her. I came to realize that my blog could be a very uplifting tribute, a celebration of her life and not a sorrowful note of her passing. Writing this, like writing her eulogy for her memorial service has provided great solace to me.

I arrived in Phoenix Monday evening and rushed to the hospital in time to share a few special hours with my Mother. She had lost consciousness a day earlier and was fighting the battle of holding on until I arrived. My sister suggested that even though she was unresponsive that I should talk to her. As I sat with my mother I spoke to her about our love for each other, our time together, about her family and her long struggle with cancer. I assured her that if she chose to move on we understood. I then began to read a short story to her by Henry Van Dyke (from a pamphlet, left in her room, that gave an explanation of the stages of dying) that was an analogy of a ship sailing off to sea and dying. Music had been playing in the background and while I read to her, one of her favorite songs, “Angel” written by Sarah McLaughlin and being sung by Jackie Evancho began playing. As I finished reading, I looked up and my Mother had passed on. She left this world on her terms and was finally at peace.

My mother, Lucy Mae Landers Keim, was an extremely beautiful woman both inside and out, blessed with incredible wisdom and patience. She lived an exceptional life for 89 years. You can only imagine what a saint she would have had to be having to deal with a son like me, as well as, an extended family of 3 grandchildren and 5 great grandchildren that my sister was blessed to have. To say the least there are too many stories to tell.

I am truly amazed and will be forever grateful that she had the faith, as well as, the will to hold on to life until I arrived, allowing us time to be together. It is that thought and her angelic look that I will forever hold dear. It was in that moment that I realized that you never know when saying; “I Love You!” may be the last time you get to do so. I highly encourage you do it – OFTEN – with the ones you love. 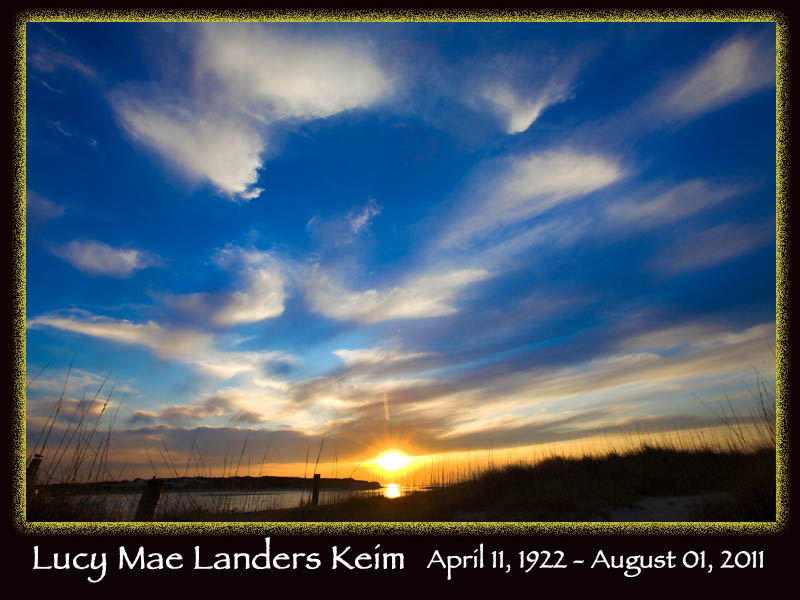 May God Bless you and your family!!