Happy Birthday America!!! What an absolutely stellar weekend it was to get outdoors and do what we do best, throwing a huge party all across America. I hope you were able to be with family and friends to celebrate the birth of our Nation!!

In 1776 there was an estimated 2.5 million people residing in America on the 4th of July while the estimate for our 2014 birthday will be upwards of 318 million. Over 35 million Americans are blood relatives to the pilgrims that came over on the Mayflower in 1620. The 4th of July has to be the most celebrated U.S. holiday of the year! To commemorate our birthday we will spend over $300 million in patriotic merchandise, $600 million in fireworks and over $800 million on food and libation consumption!!!

Given all the consumption, excitement and festivities of the day, I am pretty sure the one thing we all can agree on is that it is the fireworks we look forward to the most. It is the magic that puts the crescendo and exclamation on the day’s celebration. It is estimated that there are over 14,000 official firework displays hosted across the nation. There is nothing more gratifying and heart warming then to see the anticipation and excitement in the eyes of children when they hear the “boom” and look skyward while the rockets burst into magnificent colors and displays. I can think of nothing that takes me back to my childhood memories faster than the sights and sounds of fireworks. It is the one bond and connection that we all share as Americans on this very special day. “The rockets red glare, the bombs bursting in air!”

There are so many iconic backdrops throughout the U.S. where fireworks displays occur on the 4th, Mount Rushmore, the Brooklyn Bridge, the Washington Monument, the Golden Gate Bridge and the Statue of Liberty to name just the a few. As a Huntsville resident I can think of no better venue to host a fireworks extravaganza then the backdrop of America’s space program at the U.S. Space and Rocket Center. It is a spectacular setting and this year’s fireworks display at the center left nothing on the table. It was an exceptional visual plethora of sights and sound. Mentally, as I watched the fireworks burst in to colors, the music rang out in my head and I am sure it was Ray Charles signing America the beautiful followed by Whitney Houston signing the Star Spangled Banner. Guess I am just wired that way! 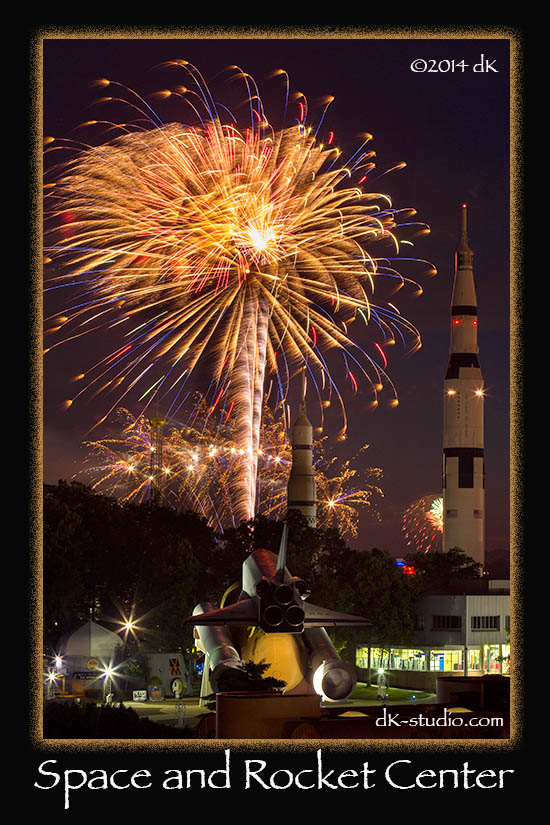 I was fortunate enough to have a bird’s eye view of not only the Space and Rocket Center event but of all of the cities fireworks displays (official and not so official) that seemed to start simultaneously at 9 PM. I had a 360 degree view from my captains perch high above the city at the Marriott Hotel – 5 Tranquility Base. I was looking for a different photographic perspective to showcase this year’s fireworks surrounding our American space artifacts and I had no idea just how majestic the view would be. Prior to the start at the Rocket Center, the fireworks shot skyward at Bridge Street and then a few minutes after that, the fireworks kicked off the Stars Baseball field. As I looked around the skyline of the city there were fireworks exploding everywhere. It was a very fitting celebration for the Nations birthday, for a city so entrenched in the history and success of America’s space program and for the U.S. Space Rocket Center. I am very grateful to the Marriott and staff for providing such an exceptional photographic opportunity. 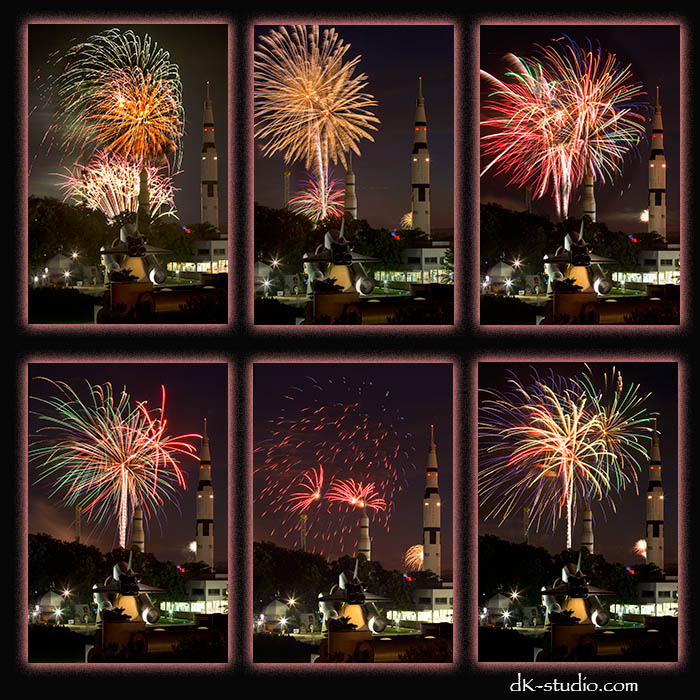