If there is one thing that has been proven for sure with my weekly blog is even though I love their beauty, I do not know “jack” about flowers and it appears that my flower experts do not either. It was brought to my attention last week that my flower of the week was not a Black Eyed Susan but rather an Indian Blanket Flower or a Gaillardia. I will keep photographing them but it appears that I need to enlist some new experts.

Last week I was hired by one of the local Outer Banks magazines, the Island Breeze, to photograph a tour conducted by the National Park Service at the Cape Hatteras Lighthouse. It was not just any tour but one that is offered once a month to the public during the full moon. As we went through the procedures of getting the ok from the NPS, I received a press release which stated in part, “All participants are required to be at least 42 inches tall and must climb the 257 steps on their own (the equivalent of a 12 story building) – they can not be carried! The lighthouse is tall, dark, often hot, humid, and can be a challenge to climb.” All I could think was that I had the 42 inch requirement covered but that 257 steps and no one to carry me, I was just a little concerned. I contemplated whether being drug up the stairs would be considered being carried.

It ended up being a beautiful, cool and breezy evening for the climb.  As the moon ascended from the ocean floor with the sun’s reflection, it appeared as a brilliant orange disk and then proceeded to take on it’s own identity as it rose in the evening sky lighting up the coast of the outer banks. It was the perfect Full Moon and no one making the 257 step climb left disappointed. I stood in amazement of the beautiful spectacle by mother nature and for the moment thought that it was definitely worth the climb to have the view.

Not to be out done by the expectations of the anticipated “full moon rising”, earlier that evening sky was layered with a beautiful array of clouds highlighted by the setting sun. It was as if the sun were saying I have my own show to worthy of notice. With the lighthouse in the foreground it was all of that and more. To say the least, either show was well worth the price of admission. 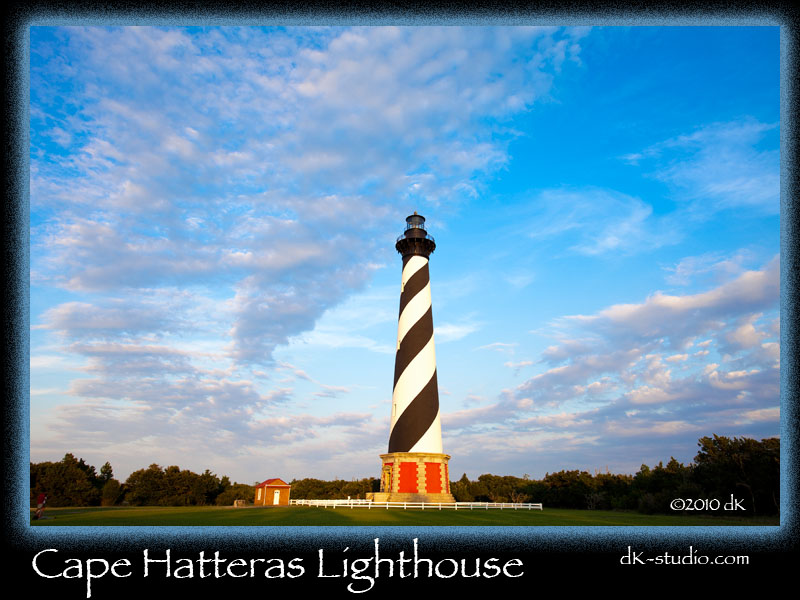 Many thanks to everyone at the NPS for their assistance.
If you are in need of any stock photography or have an assignment coming up, do not hesitate to contact me. I am no more than a phone call or an email away!