“Florence is the capital city of the Italian region of Tuscany and is the most populous city with over 380,000 residents expanding to over 1,520,000 in the metropolitan area. Famous for it’s history: Florence was the center of medieval European trade and one of the wealthiest cities of its time. It is considered the birthplace of the Renaissance. The city is known for its culture, art and architecture and is ranked as one of the most beautiful cities in the world.”

Round two of the Italian journey began with a train ride with my friends David and Kelly on the Eurail from Rome to Florence. The train travels at speeds in excess of over 200 km/h. Once we arrived into the city and settled in, it did not take long to realize we were in for an incredible treat. The city is everything it claims to be with its historical museums, palaces and churches housing some of the greatest artistic treasures in the world. Arguably, the most spectacular view of the city can be found from the Piazzale Michelangelo, high above the city.

The plaza, designed in 1869 by Florentine architect Giuseppe Poggi, offers a panoramic view of Florence which includes historical icons such as the Ponte Vecchio, the Cathedral Duomo, the Florence Baptistery and the Plazzo Vecchio.  The plaza, itself, includes a monument dedicated to Michelangelo that displays copies of David and Medici chapel sculptures. There are three David’s in the city, the original is housed in the Galleria dell Accademia, one at the Piazzale Michelangelo and the third is in the Spanish Chapel. It seems that there was no form of copyright during those days. 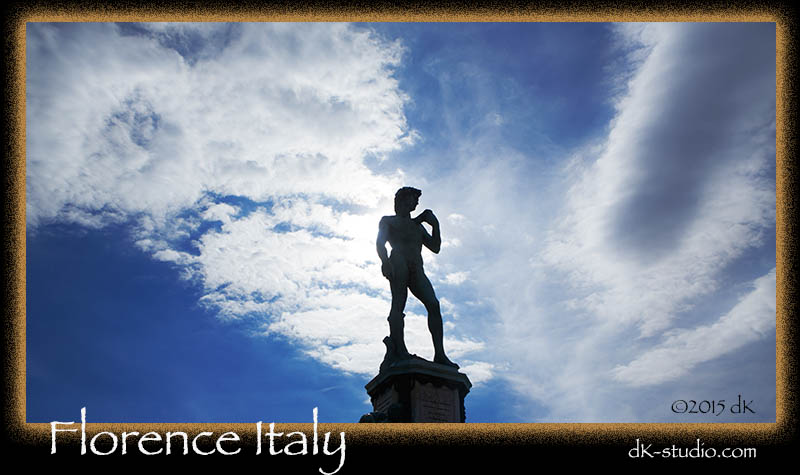 What I found most intriguing about the city was how easy it was to walk and how comfortable you felt in doing so. With each step there was an anticipation of what photographic opportunity might be in store around each and every turn in this very historical and picturesque city. Until you found your way around it was easy to get lost but the one thing you could always count on to right the ship, was find the river. With the four bridges as markers, it was easy to reset your compass.

The streets were small and packed with bicycles, motorcycles and little cars. There is just no such thing as a parking lot. As you walked along the narrow roads you just had to be aware and “share the road”! We all felt very at ease getting out late at night and walking through the streets to take in the nightlife and the beauty of the city under darkness.  It felt comfortable and the night view was just as spectacular as the day. 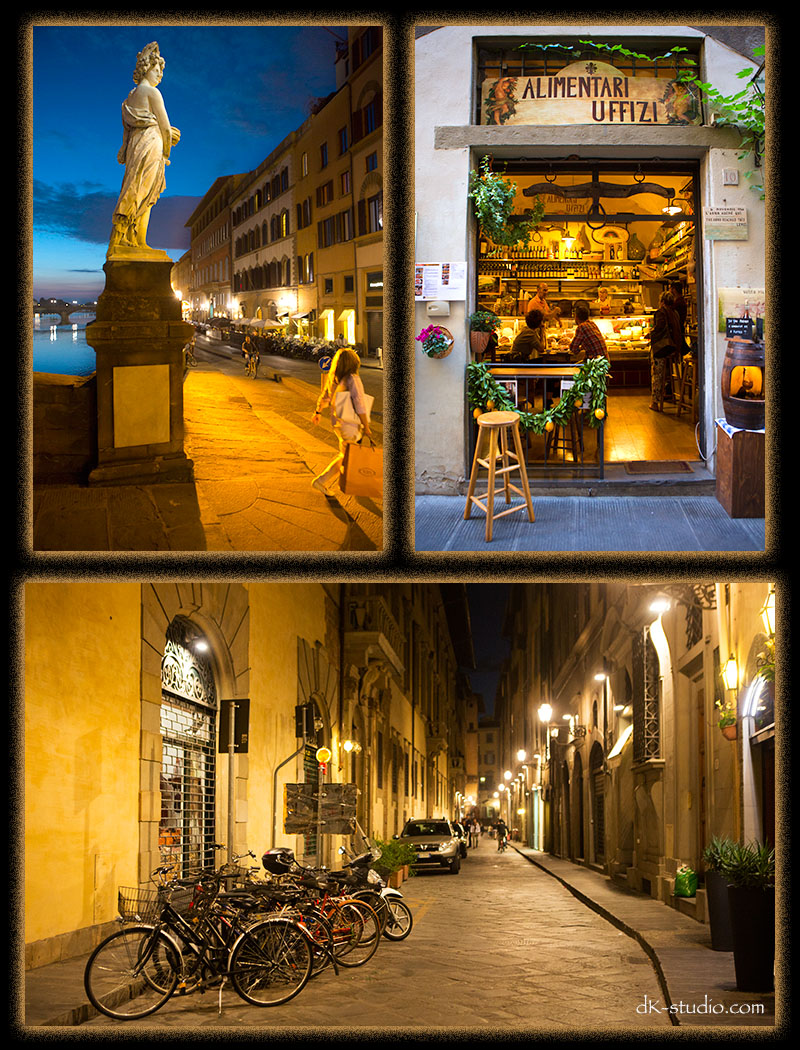 In my humble opinion, the most picturesque and iconic view of the city could be found looking up or down the Arno River that splits the old from the new. From the vantage point of one of four bridges, spectators took in the daily the sunrise and sunset, most likely with a glass of wine in hand. The most famous of the bridges, Ponte Vecchio, has been the centerpiece of shopping commerce since the 13th century. The bridge was originally built in 1218 and rebuilt in 1345 after a major flood. Today it houses exclusive shops for goldsmiths and jewelers. The shops are well known for their exterior wooden shutters but the bridge maybe most noted as the romantic spot for an evening passeggiata (stroll). During our visit we were treated to a full moon that made for the picture perfect ending to an incredible visit to this beautiful city.

Stay tuned for the last stop on the Italian journey, Venice.
ARRIVEDERCI!!! 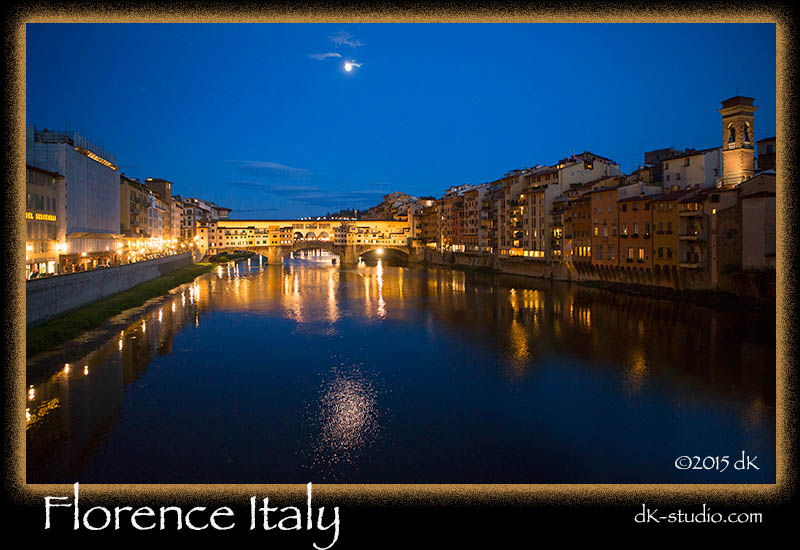