Happy Monday to you all! With the weatherman’s prediction of potential rain all weekend it actually turned out to be a good weekend for getting outdoors.

With the Huntsville Stars 2014 season coming to an end and the possibility of this being the last season played at Joe Davis Stadium, it was very fortunate for all their ardent fans that they found themselves still alive and headed to the playoffs. By virtue of winning the first half of the season, the Stars found themselves playing in the Southern League’s best-of-five North Division championship against their rivals, the Chattanooga Lookouts. The first two games were to be played in Huntsville with the remaining played to a series ending in Chattanooga. If the Stars win the series, they head to the Southern League Championship to play the winner of the South playoffs. If they lose they pack their bags for Biloxi where they are suppose to play next season. The Stars have won the title 3 times besting the rest in 1985, 1994 and 2001.

On the first night of the playoffs a group of us headed down to the ballpark to catch the first of two games in what may be the final swan song for the beloved Huntsville Stars. It was a glorious evening that was accentuated by a 45 minute rain delay allowing for the umpires call, “Lets play ball!” to be broadcast right at sunset. It was a spectacular sunset and a glorious way to start the game. Some of my friends had not been there in years; some had never been to a game at the stadium. But with beer and peanuts in hand we settled down to take in all that the tradition of Double-A ball had to offer. It is, as you know, Americana at its best! 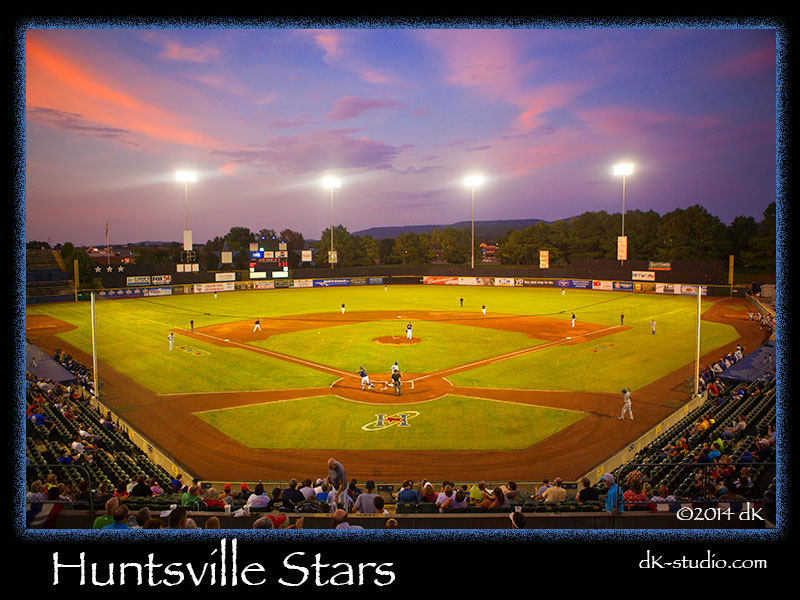 It turned out to be an exceptional evening under the stars and lights with the Stars making some exceptional plays on defense to keep the game close but at the end of the evening they came up one run short. On Friday night they shut the Lookouts down and evened the series 1-1. As the series goes, Huntsville lost the first and third games while winning the second and fourth to even up the series. Tonight they play a “winner-take-all finale” that will be hosted in Chattanooga with the “Lets Play Ball” call at 7:15 pm.

It maybe every child’s fantasy to play in the big league and it all begins on the “field of dreams” where their fantasies flourish and take hold. On any given summer evening in America, these dreams can and do become a reality starting as early as the Pee-Wee leagues. For the Huntsville Stars and all of the players, past and present, that have given so much to the game and to our city, we tip our hats one last time and say, ‘Well done Stars, well done!” ENJOY!!!