To think we would have snow so far south that it would find it’s way to Mobile, AL is unbelievable. Another week of Mother Nature’s fury. I write you as I head home from a two-week stay in Hatteras, NC.

Wednesday morning my girlfriend and I drove 2 1/2 hours to Norfolk, VA encountering snow as we hit the Virginia state line. Heading to the airport to catch a flight out, we arrived early only to be informed that my flight home was cancelled. So back to the Outer Banks (OBX) we drove only to find that strong westerly winds had pushed the water from the Pamlico Sound up on to the only road in and out of the Outer Banks, Hwy 12, at levels anywhere from 1-3 feet.

Within the scope of traveling 9 hours that day we went through mild flooding, rain, sun, sleet, beautiful skies, snow, gale force winds and finally, major flooding. Coming back into the Outer Banks, State Troopers were warning drivers headed south on Hwy 12 (his joke to us … swim at your own risk, every man for himself) that only 4×4’s and individuals stupid enough to attempt it, could proceed. With my girlfriend and her dog on board and no place to go, we chose to venture down the highway now aptly titled “Canal 12”. Westerly winds upwards of 60 mph had pushed the water from the sound up on to the road and as high tide approached, the water depth was elevating. We actually had waves crest the hood of our SUV from on coming vehicles as we chased waves from our own vehicle. I literally felt like we might end up in one of those homemade rescue videos floating down the highway.  Passing the many storefronts with water up to their porches we actually saw, amongst many other things, two kite boards floating down the road from one of the rental locations. After a return “float trip” of 5 ½ hours, we finally arrived home as the sun was setting. I felt like a Kayak would have been a more appropriate travel vehicle.

As the sun rose on Thursday and the winds subsided, the waters receded from the road back into the sound. It was as if the day before was only a dream (nightmare). It just goes to show you just how fragile and ever changing the weather can be on an Island. 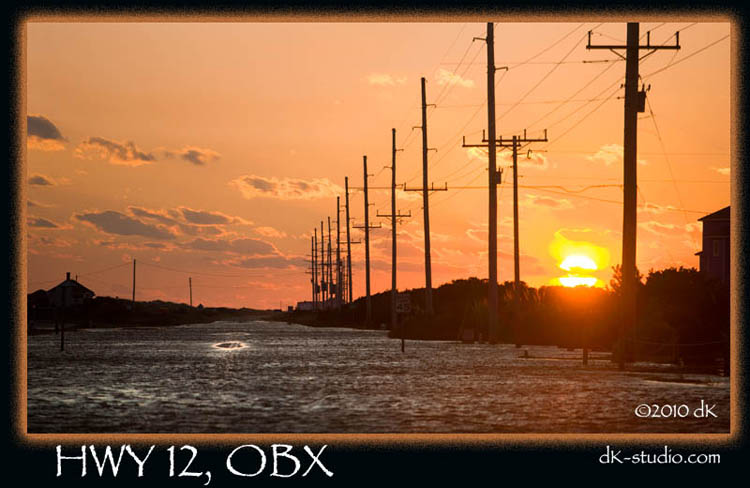 I hope you all spent Valentines day in a fashion very befitting your current relationship status.  For those that are single …. Another 12 pack of beer I presume.