Calm Before The Storm

For most of you last week was mostly … uneventful. Your last three-day holiday weekend spent wondering where the summer had gone and then back to work today. For others, especially living on the east coast, it was a week that most may just soon wish to forget. Having grown up in Florida I have had my dealings with the potential of hurricanes but never had one where I felt any eminent danger. Most ran up the east coast or brushed the west coast as they headed north into the Gulf of Mexico. As time has past, Hurricanes have gotten more abundant and robust and we have seen the effects of what a hurricane can do when it comes ashore with all of it’s power and fury.

This week I had my first real encounter, dealing with Hurricane Earl and the anxiety caused by the uncertainty of what effect it might have on those that live along the eastern seaboard. Weather forecasts predicted that there was the potential of a direct hit on the Outer Banks. As the week progress we all found ourselves glued to the weather channel and to what Al Roker and Jim Cantore felt “might happen”. Cheryl and I discussed what our options were and the potential of evacuating if the hurricane looked eminent for a direct hit on the island. It is a two-lane road and is very prone to wash over, flooding and collapsed dunes allowing for major debris to make the road impassable.

On Wednesday evening, 24 hours prior to the projected arrival of Hurricane Earl, there was not a clue that anything with that potential destructive nature was heading our way. It was “The Calm before the Storm.” 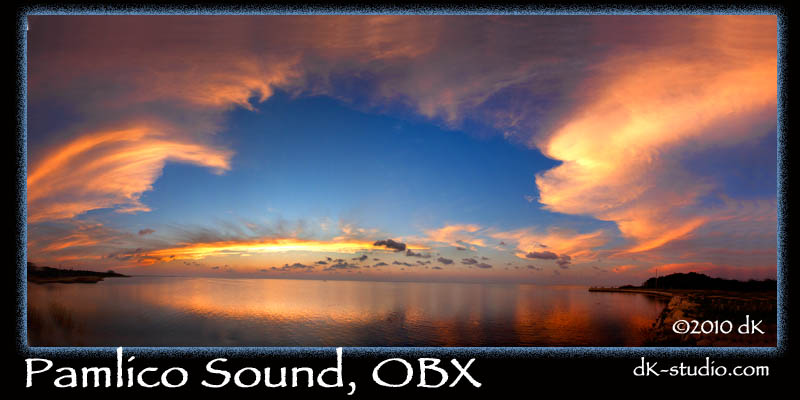 As the reports continued, the hurricane went from a Category III to a Category IV. The one person you do not want to see in your hometown during the potential of bad weather showed up, Jim Cantore. The weather circus had come to town and the master of ceremony was here. There was no way to predict what was to happen and as time went on it became apparent that neither did they. Mandatory evacuations had begun for all living on Ocracoke Island and for all non-residents on Hatteras Island. With the potential of what might occur if the hurricane were to continue on it’s current path, we packed up the gallery and moved all of the essential items to higher ground. On Thursday morning the weather prediction was still extremely uncertain, mandatory evacuations had been called for south Nags Head and after talking with friends we decided the most prudent decision was to pack what we could and head north. So with the car packed, Cheryl, Coop dog and I headed off the island to be out of harms way.

Once we arrived in Kill Devil Hills and settled in we continued to monitor the weather closely to see what the latest news and predictions were. As “luck” would have the hurricane was down graded and the potential of a direct hit on the Outer Banks had became very unlikely. At best we were to get tropical storm like weather with high winds and flooding from the sound. Listening to the news and understanding the potential effects, we knew that no matter what damage may occur, it would be a minimum of 2 days before we could get back on the island once the hurricane past. It may have not been the smartest of decisions but with great anxiety and even greater uncertainty we discussed our options and decided to head back on to the island while the roads were still passable. So pack we did and headed south.

As nightfall came with the high winds and flooding, as predicted, we met with friends and made preparations for what we were in store for. We settled in for the evening to “ride the storm out”. Again, maybe not the smartest of decisions but a very calculated one on all the information we had. The winds howled though the evening and into the morning and as dawn broke we could see the flooding from the sound had over taken Highway 12 and the winds had caused minor destruction in areas. Luckily for all that had stayed, including us, the most we had lost was a night’s sleep. In spite of the flooding the island faired well, we never lost electricity and no lives were lost.

Again this is not to say that our return to the island, with Hurricane Earl still being very unpredictable, was the smartest of decisions. We knew that there would be allot to do once the hurricane had past and decided it would be best to be there to assist in the cleanup and getting the village back to normal. It was after all, Labor Day Weekend.

It would be very difficult to put into words all of the anxiety and uncertainty we anguished over for 48 hours but as Friday evening announced itself with a beautiful sunset, the effects of Hurricane Earl began to disappear.  For the fleeting moment, it was if you had to stop and think, “Could it all just have been a dream” 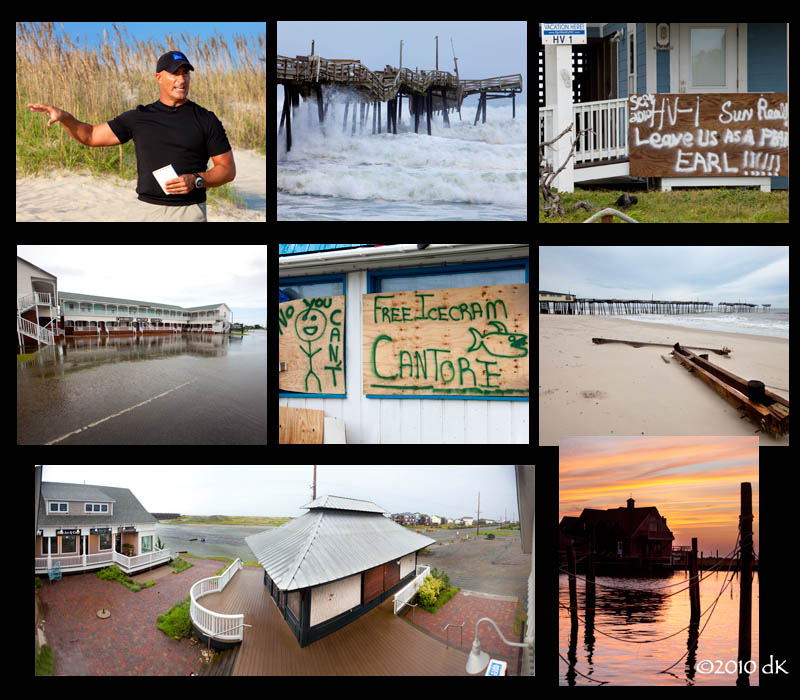 Good news is we are all safe and sound and the island is back to normal with the tourists coming in and making the most of a beautiful three-day weekend. As for me it is back to work and I look forward to hearing from you with any requests for shoot assignments or stock photography needs.