I trust this email finds you doing well and looking forward to the week ahead which may include your overindulgence of all things good with the upcoming 4th of July weekend.

What is it about Big Boys and their big toys? For the first two weeks of June, the south eastern seaboard of North Carolina is invaded with large and expensive charter fishing vessels participating in the $ 1,000,00 Big Rock Tournament and then followed up by the Hatteras Marlin Clubs’  Fishing Tournament.  It is a site to behold when the boats leave, as well as, return to the harbor and to view as their “catch of the day” is off loaded on to the docks.

They are christened with names like Tooth Ferry, Outlaw, Bite Me, Bak Bar, Licketysplit, Diamond Girl, Reel Jim and the list goes on.  Two of my favorites , Fin-Nominal and Honey Hush.

For those two weeks they chase fish, socialize and tell stories about the ones they caught as well as the ones that got away, Big Boats, Big Guys and bigger stories.  This year at Big Rock the “Big News” was that the winning boat Citation got “a citation” after it weighed in with a 883 pound Blue Marlin. Seems that one member of the crew had not purchased his $ 10 North Carolina fishing permit.  Not such a big deal you would say but as they found out, Rules are Rules. What did it cost the crew of the Citation, the lost of the million dollar purse. Most are saying that is the “one that got away.” Life does go on but you have to wonder how???

As week two got underway, I decided to take an aerial tour (thanks to Mark at Burrus Flying service) of the south end of the island including Hatteras Village and all of it’s boating splendor. Boats of all sizes were coming in to the harbors as the fishing day was ending. Fishing is Big Business here.  It was such an incredible sight as we flew above and then came upon the Marlin Club in all of its’ Big Boy Toy glory. All I could think of us how many “large tails” were being told under the tents? 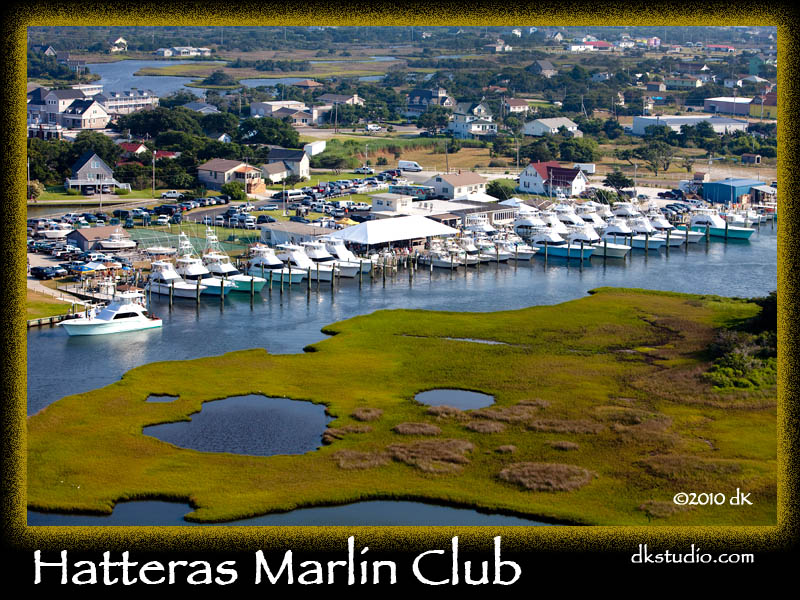 I wish you a safe and enjoyable Fourth of July with family and friends.  If you find yourself in need of a stock shot, have an assignment or just in need a large fishing tale, please do not hesitate to contact me. Heck you might even find me in town!