Every Monday I have the honor and privilege of providing you with a little glimpse of my world and vision in hopes that it might in some small way start your week off with a little ray of sunshine. In return I have received numerous responses in which some of you have indicated it is something that you now look forward to with your Monday cup of coffee. I hope that you find the ray of sunshine in this weeks’ blog and, as well, please excuse the length.

Last week was a very trying week for me in that I had four friends and acquaintances in varying parts of country depart for higher ground. Any one of those passings would have been difficult to accept but for all to occur in the same week gave cause for a lot of reflection. One individual was a long time neighbor of my parents, one the mother of a friend and photographer, one a dear friend and fellow photography instructor and the last a very dear friend and Yacht captain. Each of these individuals is worthy of remembrance due to the effect that they had on my life.

The last of those passing hit home a little harder. Daniel Stephen Long, was known to all that the pleasure to make his acquaintance as Captain Dan. Dan was the man at the helm of the 124’ Christensen, “High Tide II” owned by Adtran founder, Mark Smith. The yacht ( to say the least) was very noticeable when it was moored at Lake Guntersville or when it stopped at the Hard Dock in Decatur AL for their first dining experience as they started their annual trip south to the Caribbean.

I met Capt. Dan for the very first time on my 50th birthday and from that moment felt as if we had known each other all of our adult lives. He just had a way about him that was so accepting and open and made everyone feel comfortable in his presence. Over the next couple of years we spent a fair amount of time on the river swapping tales and sharing exploits.  After he retired, he moved back home to Texas and I would hear from him with a comment or two concerning the blog or just to stop in, say hello and catch up on what we were both up to. His was always a welcomed voice and I relished in acknowledging his call by saying, “Capt. Dan, Capt. Dan”, a spin on the Lt Dan phrase from the movie Forest Gump.

I had the pleasure on two occasions to spend time with Dan on the High Tide II. Once in Ft Lauderdale to ring in the New Year and once in the British Virgin Islands while doing a magazine cover story on him and his long-term friendship and Maritime relationship with Mr. Smith. We spent five glorious days motoring in and around the Virgin Islands. I had enjoyed a few sail trips to the BVI’s always wondering who exactly it was on the back deck of those huge yachts moored in the harbors and there I was sipping a Corona while others passed by, hopefully wondering the same thing about me and my band of brothers. As you can imagine it never quite felt like I was there on business.

The funny part of the story was I had already been invited down by Dan as a guest and was checking travel details when the magazine called and inquired about my availability to cover a story they were considering doing on Mr. Smiths retirement and his boating adventures.  I assured them that was probably not a story that they would ever secure but suggested the next best thing, his Yacht captain. Not the “man” but the “man that sat next to the man!” Five days in the islands, all expenses paid and day rate covered, I was on my way. And a glorious five days it was with my friend and crew. The unfortunate part of it all, was the local magazine closed it doors prior to the story being published and I have always felt a little remorse about “my friend” not getting his due.

I had an opportunity to talk with his long time friend and First Mate, Ray Caraway and he said Dan wanted us all to rejoice in our friendship and celebrate his life. To that end I hope Capt. Dan is somewhere reading this blog with that same wryly smile he greeted everyone with. Ray left me with the comment that over the 20 plus years that he and Dan worked together that they were at odds only a couple of times. Capt Dan always finished the discussion with Ray by saying, “You know the Captain may not always be right, but he will always be the Captain!” To that end I salute you … Capt Dan! 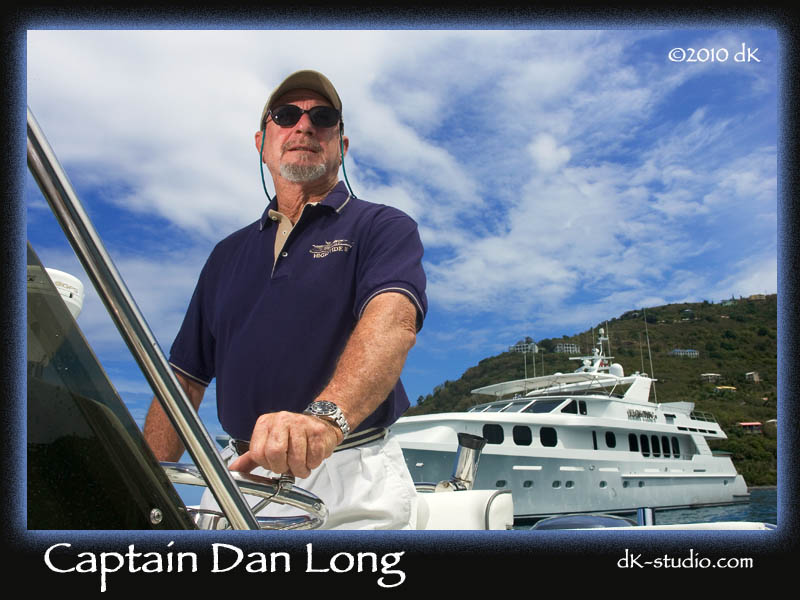 If you are in need of stock photography, have an assignment coming up or just miss me, do not hesitate to call or email.